for what they've done to me

Also, in case you didn't know, John Darnielle is now on Twitter (and being generally amazing there).

tMG on Late Night with Jimmy Fallon tonight. Probably be on hulu tomorrow if you don't have cable and live in the US.

Some tMG fans over on the website's forums have created a tribute CD that is being given away with a donation to Farm Sanctuary. Each person (band) involved submitted a song, which was randomly shuffled in with the other submissions and given out to the participants.

There are a few hard copies still available, the picture above being the CD sleeve front and back. I will have about 8 at the Bell House show in Brooklyn on December 2nd. If you won't be there and still want one, they are available for download and there might be more printed and sold online.

The donations raised will go to adopt a goat at farm sanctuary so all tMG fans who visit the NY shelter (whether at Zoop of not) will have a friend to hang out with at the farm.

for more info on the CDs and reviews of the tracks go here: http://www.mountain-goats.com/forums/read.php?2,83340

or check out the official album page: www.uglythingsinthedarkness.com

John Darnielle solo @ Ruby Lounge, Manchester - 11th october '09
not very good pictures
and a really brief gig, but yet so so worth it!

So I'm sure most/all of you have seen the

My question is: anyone else planning to attend the Dallas gig (and/or Austin)?

So Farm Sanctuary posted some photos of Zoop II on flickr. 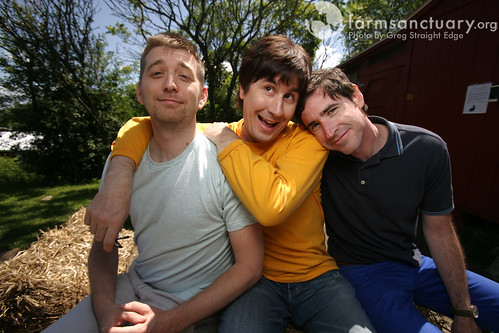 I think I have a new desktop wallpaper :]

For those of you not on tMG Forums:

Hello All!
On a Forum thread the brainstormed idea of creating a tMG themed recipe zine came up. A few of us has decided we are going to do it and are now looking for submissions. Before you even start thinking about your ideas, WE MUST STRESS THAT THIS COOKBOOK WILL BE VEGAN RECIPES ONLY out of respect for John's vegetarianism and his work for the Farm Sanctuary. If you think it will be funny to submit your recipe for spare ribs, it won't be. Many fans have switched to an animal free diet because of John's work with TFS, and we thought this could be a great help for them, a way to help raise money for TFS, as well as a kick ass zine.

You may be asking, how does tMG factor into a recipe book? Simply put, there will be tMG woven all throughout, but the main aspect is that the recipes will be tMG song inspired, using puns and lyrics to create the titles. If you need help, here a bunch of the lyrics transcribed: [www.themountaingoats.net] Also, look below for examples.

So, having read all of the above, if you are still interested in submitting a recipe, here is what we are looking for in the submission:

*title of recipe - mixing in a tMG pun/lyric
*name of submitter (& forum name if they are on the forums)
*little blurb talking up the recipe, or a short personal story ex: "this one works great for picnics!" or "Some people think it's a little too spicy, so be careful if you can't handle heat"
*ingredients list
*estimation of how many it serves
*directions written in an easy to read format

Now, to make a more cohesive recipe book, we probably won't be able to accept all submissions if it is a similar recipe or similar recipe name, so feel free to submit up to 3 recipes. Below will be a place to ask questions and post the recipe titles you want to submit, so read through and see if someone had a similar title or food creation before you try to lay claim. Please send actual recipes to: starlingzines@gmail.com where they will be compiled and assembled into tMG recipe book. Eventually we'll also be asking for a brief bio for the back, but we'll get to that later in the process when we have more details.

Hey everyone, I started up a Fuck Yeah The Mountain Goats tumblr for any and all things The Mountain Goats. I'll be posting an entry every day. Follow it if you have a tumblr, or sign up if you want (warning: it's addicting, but amazing).
Collapse